A combined narcotics investigation involving agents from the DEA, Homeland Security Investigations, and the Corpus Christi Police Department Narcotics/Vice Investigations Division resulted in the disruption of a south side drug trafficking operation early Friday.  At approximately 8:00 am, investigators from all three agencies served a search warrant on a residence in the 4900 block of Monitor Street.  During the search, officers found and seized approximately 30 pounds of marijuana, a small quantity of methamphetamine, three handguns, a rifle, a shotgun, and over six-hundred dollars in cash.  One of the firearms was discovered to be stolen, and a second had the serial number obliterated. The suspect, a 53-year-old man, was transported to a local hospital after he complained of chest pains.  He is facing felony charges for manufacture and delivery of marijuana, along with possible felony charges for possession of a stolen firearm and tampering with serial numbers. Today’s bust is yet another prime example of the cooperative efforts between the CCPD and Federal Agencies to combat drug trafficking in our community. 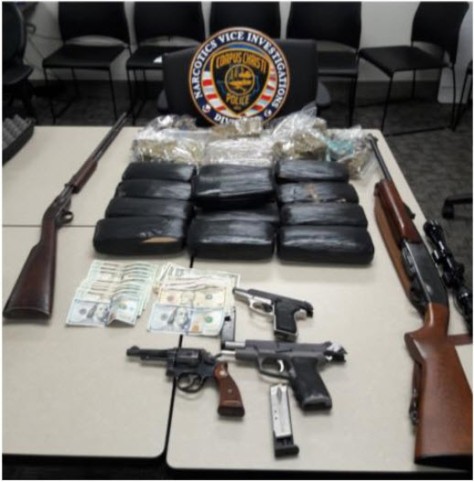