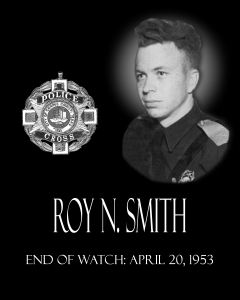 On April 20, 1953, Patrol Officer Roy Newton Smith was responding to a fight call when his patrol car was struck by another car at Staples and Lipan. Smith died of his injuries that day. Smith was 21 years old and had been on the department for just 4 months at the time of this tragic accident. Roy was married to Laverne Smith and had come here from Wichita Falls, Texas to work at the department. Roy and Laverne had one daughter Gail. Roy served with distinction in the Army having served in the Korean conflict before joining the department. Please take a moment out of your day to remember our fallen brother. Our prayers remain with him and his family and may we never forget him and his sacrifice. Roy Smith is the fourth officer to die in the Line of Duty for the Department.

As a side note, we were able to locate his only daughter Gail Michalsky of Spring, Texas who never had a chance to know her father and she attended her first Police Officers Memorial Service last year. She was given a copy of the Wall of Honor photo by Texas Attorney General Greg Abbott.