Narcotics/Vice Investigations Division officers conducted surveillance at a local hotel, when they observed what appeared to be a drug transaction.  Investigators observed a 24-year-old man deliver two large bags of what investigators suspected was synthetic cannabis to a room at the hotel and then drive away. Investigators followed the suspect vehicle until Corpus Christi Police Patrol Officers conducted a traffic stop on the 600 block of Power Street.  Inside that vehicle officers located approximately $2,500 in cash, which they believed to be proceeds of the drug deal.  While officers were conducting the stop, Narcotics Investigators observed Longino Castillo (5-22-1990), leave the hotel room with the suspected cannabis and exit the parking lot in a vehicle driven by a second man with a woman passenger.  Investigators followed the second car to the same location on Power Street where the first car was stopped and again had Patrol Officers conduct a traffic stop.  Inside the vehicle, officers found and seized approximately 3.5 pounds of synthetic cannabinoid.  The driver, Justin Flores (11/21/1981), passenger Julissa Rios (2/12/1998) and Castillo were all arrested and charged with first degree felony manufacture and delivery of a controlled substance (Penalty group 2A). 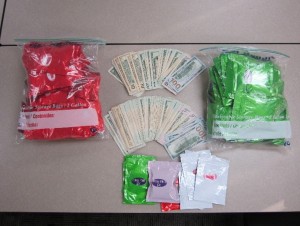 The 24-year-old man in the first car was arrested in Portland for first degree felony manufacture and delivery of a controlled substance by Portland Police Officers, who assisted Corpus Christi Police with this investigation.

A Corpus Christi Police Officers saw a blue 2005 Ford F-150 pickup run the red light at Weber and SPID at 9:36pm Friday night, so, the Officer initiated a traffic stop. The Officer discovered the F-150 did not have insurance, the Officer impounded the vehicle. The Officer noticed from the exterior of the vehicle (front windshield) cash inside a plastic bag stuffed in the headliner. The Officer got the bag and discovered it also contained several bags of cocaine. Officers arrested the driver, Alaric Flores (12/6/1999) for possession of a control substance (cocaine) which is a third degree felony punishable by up to 10 years in prison and up to a $10,000 fine. Officers impounded the vehicle and delivered Flores to the city detention center.

Corpus Christi Police arrested two people for possession of a variety of illegal narcotics Monday morning in a city park after the Officer met the couple for violating the park curfew.

The Officer detected a strong odor of marijuana coming from the vehicle as he approached the couple while the couple sat in a red 2009 Ford Escape at just before 3am at 300 Beach Avenue on North Beach. The city park has a curfew from midnight to 6am daily. The Officer introduced himself to 31 year old Raul Cedillo (3/24/1985) and the passenger, 33 year old Crystal Perez (9/24/1983). The Officer saw two marijuana cigarettes in the center console and a bottle of Alprazolam pills in the passenger area of the vehicle. The Officer arrested Cedillo and Perez for possession of marijuana and controlled substances, then conducted an inventory of the vehicle for the impound and discovered a bag in the trunk which contained 35 individually wrapped bags of marijuana, more Alprazolam pills, and a quantity of what the Officer believes is methamphetamine with a weight over 1 gram.

The Officer impounded the vehicle and delivered Cedillo and Perez to the city detention center.

Corpus Christi Police arrested 31 year old Rodney Eulenfeld (12/25/1985) for possession of 6 pounds of marijuana after the contraband was discovered on a traffic stop yesterday afternoon.

A Corpus Christi Police Officer conducted a traffic stop at the 7800 block of Jim Wells Drive near Oso Parkway in the area of Yorktown and Staples at 1:35pm Wednesday afternoon. The Officer conducted a traffic stop of a 2006 black Jeep Commander for the driver using the cell phone while driving. The Officer had his K9, Tanja, on the traffic stop and had the dog conduct a search of the exterior of the vehicle. The dog, Tanja, indicated there was contraband in the Jeep, which led the Officer to discover 6 pounds of marijuana with an estimated street value of $30,000 dollars.

The Officer arrested the driver, Rodney Eulenfeld for Possession of Marijuana. The Officer seized the marijuana as evidence, impounded the vehicle, and delivered Eulenfeld to the city detention center. Possession of Marijuana in the amount of 5 pounds to 50 pounds is a 3rd Degree Felony punishable by up to 10 years in prison and up to a $10,000 fine.

A 65-year-old man reported an aggravated robbery at a pharmacy on Saratoga Boulevard this morning to the Corpus Christi Police.

The 65-year-old man described the robbery suspect as an adult male, approximately 5 feet 10 inches tall and wore a baseball cap, black shirt, red warmup pants and latex gloves. The 65-year-old man told Officers the suspect had a tattoo on his left cheek, his neck and arms were covered in tattoos.

Detectives obtained images of the man and now want help from the public to identify this robbery suspect. 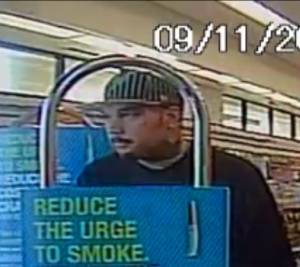 The Corpus Christi Police Department Narcotics / Vice Investigations Division served a search and arrest warrant at room #151 at the La Siesta Motel at 4300 Leopard at noon yesterday.  Investigators located over 80 grams of crack cocaine,  182 grams of synthetic cannabinoid, 11.5 grams of Xanax, 4.09 grams of ecstasy pills, a Taurus .40 caliber semiautomatic pistol, and $1919.00 in cash.

This action is part of part of a lengthy and currently ongoing investigation into the sales of drugs in the Leopard Street corridor.

The Corpus Christi Police Narcotics Investigators conducted simultaneous search warrants at two local businesses and a Southside home Thursday afternoon in their campaign to combat the scourge of synthetic cannabis impacting our city.

The search warrants were the culmination of a lengthy undercover investigation into the illegal sales of synthetic cannabis from the two businesses, Tobacco Junction #1, 4346 Ayers Street and Tobacco Junction #2, 9858 Leopard Street. The home, in the 7700 block of Outreau Street, was the residence of the business owner, which Narcotics Investigators believe was also used as a home office for the two businesses.Officers from the Corpus Christi Police Department’s Organized Crime Unit, Directed Patrol, and Bike Team assisted the Narcotics Investigators in this action.

Narcotics Investigators seized over eight pounds of synthetic cannabis, over $22,000 in cash, several computers, two handguns, cellular phones, receipts, and drug ledgers during the search of the two businesses.

Narcotics Investigators arrested the business owner, Shakir Abdul Memon (9-1-62) and employees Catalina Ceballos (2-14-71) and Eva Linda Delapaz (10-18-82). All three face felony charges of manufacturing and delivery of a controlled substance, a first degree felony punishable by from five to ninety-nine years in prison.

Narcotics Investigators have maintained close communication with the Texas Attorney General’s Office throughout the course of the investigation, specifically in relation to suspected civil violations under the Texas Deceptive Trade Practices–Consumer Protection Act and the Texas Business and Commerce Code. Under these statutes, violators can face civil penalties of up to $20,000 per package of synthetic cannabis. On Thursday, the Attorney General’s Office in District Court filed a motion for a Temporary Restraining Order against Tobacco Junction, asking the court to issue a cease and desist order to prevent the business from continuing operations.

Narcotics Investigators believe this operation will result in a major disruption to the flow of synthetic cannabis within the city, and will hopefully send a message to other business owners who are either selling or considering selling this toxic product.

Investigators obtained a search warrant for Room 226 at the Red Roof Inn at 6805 South Padre Island Drive after an investigation started the previous evening into drug dealing going on from that hotel room.
Upon service of the search warrant, the following subjects were arrested:

Investigators seized 427 bags of synthetic cannabinoid packaged for street-level sales, totaling an approximate net weight of 4.27 kilograms.  There was also 3.1 grams of marijuana seized in the room.  Investigators seized over $4550.00 in US Currency as well as a Subaru Forester.  The estimated value of the drugs seized was over $17,000.00 dollars.

Anyone with information to provide investigators about drug sales may contact the Corpus Christi Narcotics and Vice Investigators at http://www.stopdrugcorpuschristi.org. 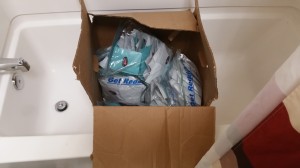 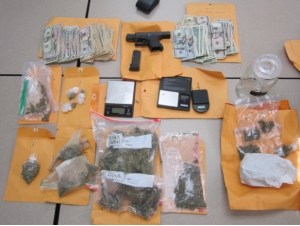 The Corpus Christi Police Narcotics/Vice Investigators and uniformed patrol officers served a search warrant Wednesday afternoon at 117 Richard that was the result of several months of undercover investigation into marijuana dealing from this residence. Investigators arrested 36-year-old Nathan Gates, 4/21/80 for possession of marijuana. Gates was stopped in the 3300 block of Ayers by patrol officers assisting in the operation. Gates was returned to the residence and the search warrant executed. The search resulted in the seizure of 432.13 gr of marijuana, a Glock handgun, and $3,356.00 in cash, to include scales and packaging.

Anyone with information about the sale of illegal narcotics may submit the information to Investigators anonymously at the site http://www.stopdrugscorpuschristi.org.

Corpus Christi Police Narcotics Investigators, with the assistance of Police SWAT and Gang Units, served an early morning search warrant today at a residence in the 1200 block of 17th Street.  The search warrant was the culmination of a month’s long undercover investigation into drug trafficking from this address.  Arrested as a result of the raid were Longino Castillo (DOB: 5-22-90) and George Soto (12-7-93), both known local gang members.  Due to the gang involvement and the known existence of numerous firearms inside the residence, Narcotics Investigators enlisted the service of CCPD SWAT to make entry into the residence.  SWAT Operators gained entry to the residence at approximately 5:40 am, with no injuries reported to any occupant of the residence or officer.

Investigators seized a virtual arsenal of legal and illegal firearms, including semi-auto assault type rifles, shotguns, handguns, and improvised firearms, sometimes referred to as “zip-guns”, along with over 1000 rounds of ammunition. Officers also seized several homemade noise suppressors or “silencers”, five sets of body armor, homemade breaching tools or “rams”, ski masks and gas masks.  The existence of this bevy of weaponry and assorted raid type equipment suggests possible involvement in much more than narcotics trafficking to include robberies, drive-by shootings, home invasions and/or other acts of violence.  Agents from the Bureau of Alcohol, Tobacco and Firearms responded to the scene and will be assisting with the investigation.

In addition to the weapons seized, officers seized distribution level amounts of synthetic cannabis, along with lesser amounts of crack cocaine, heroin, and marijuana, over $3,400 in US Currency, cell phones, weight scales, and suspected drug ledgers. Narcotics Investigators believe that this operation was a mid-level supplier of illicit drugs to smaller drug houses and street level dealers.

Narcotics Investigators believe this raid will deal a serious blow to the proliferation of synthetic cannabis dealing on Corpus Christi’s west side, downtown and near City Hall. Narcotics Investigators will continue to pursue leads as a result of this search warrant and are confident that more arrests and seizures will follow.