Corpus Christi Police Detectives need your help identifying two men that they believe put a skimming device on an ATM at a bank located at 6230 South Staples Street on February 4.

Officers responded to the bank after a customer came inside and told employees that he went to use the drive thru ATM and when he inserted his card and attempted to pull it out, the card got stuck. The customer said he pulled harder on his card and that is when the dock where you insert your card broke off.

When bank employees went to investigate they discovered that the part that broke off was actually part of a card skimmer device that was designed to look like part of the ATM.  The skimming device was designed to fit over the card insert dock and was held in place with adhesive tape. When they investigated further, they also found a small camera that had been placed on the ATM and was also being held in place by tape.  They believe the camera was used to record people entering their bank pins numbers.

Police were able to obtain images of the suspects from the real camera of the ATM as they were placing the skimming device on the machine at about 7:30  PM on February 3. 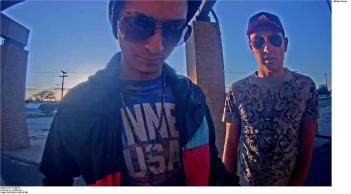 If you recognize either of these two suspects or if you have information about this case please call the Corpus Christi Police Criminal Investigations Division at 886-2840. Anyone who would like to keep their identity secret and provide information to the Detectives should call Crime Stoppers at 888-TIPS (8477) or submit the tip online at http://www.888TIPS.com. Information provided to Crime Stoppers which results in an arrest may earn the caller a cash reward

Corpus Christi Police Department Officers are out at the Turkey for Troops event. You can find us at Mike Shaw Toyota located at 3232 I-69 Access Rd. Come on out and speak to one of our recruiters while you are there!
CALLING ALL VETERANS! Did you know that we offer prior military five (5) additional veteran points on their civil service exam? Did you know that we offer 240 hours per year for military time, for those who are active reservists? That is in addition to the vacation, sick, personal and comp time officers already accrue. Did you know that Corpus Christi Police Department currently has 160 Police Officers that have prior military service? We currently have an additional 20 officers that are active reservists. Call one of our recruiters at (361) 886-2626, they can help you start the process and answer any questions you may have. In order to qualify for the 5 veteran points, applicants must pass with a minimum of 70% and achieve the cut-off score (if set). Only an “Honorable” discharge will qualify the applicant for the five (5) veteran points (given to applicant if they receive 70% or better on the written exam). The Honorable discharge must have occurred prior to the entrance exam. “General (under honorable conditions)” allows the applicant to take the test but will not qualify the applicant to be eligible to receive the veteran points. A DD-214 long form (member #4) must be received on or before the written exam date in order to receive veteran points.
We had 25 hopeful applicants come out today for our practice physical assessment. They did a great job and look forward to seeing a few of these faces in our 79th police academy. If you want to attend our next practice assessment in December, call 886-2626 to get your name on the list.