Investigators with the Property Crimes Unit need your help identifying the individual seen in this video.  He is believed to have stolen a wallet.

On Saturday February 4, 2012 shortly after 3:00pm, an elderly customer left his wallet on the counter and walked off after he paid for his items.

He did not realize his wallet was missing until later that evening.  He called Wal-Mart and asked security personal if someone had turned in the wallet.

Security personal took the extra step and checked their security video in order to locate the customers wallet.  The Wal-Mart security personnel discovered that the wallet was picked up by another individual, who left with the wallet.

The individual is described as a white male in his early twenties, clean-shaven, with a shaved head. At the time of the theft he was wearing a black jacket with Georgia across the chest and faded jeans.

The car in the video is the car the man left the store in.  Although the licence plate is visible, the Police Department have been unable to identify all the numbers and letters.

If you can identify this man, we encourage you to call Crime Stoppers at 888-TIPS, or log on at www.888tips.com.  The information you provide could earn you a cash reward.

Units responded to 4109 S. Staples reference a theft in progress at the Wal-Mart. When they arrived officers were told that a black male had stolen a large screen T.V. from the store and in the process punched a witness in the face.

The suspect was described as a bald black male wearing a red long sleeve shirt who drove off in a black Cadillac going south on Staples.

Units responded to the 4600 blk. of Nicholson in regards to a vehicle in the middle of the roadway. When they arrived they located Oscar Uribe (3-21-84) passed out behind the wheel of the vehicle. In between his legs officers saw a pill bottle with 6 baggies of cocaine in it, as well as a bag of marijuana in the vehicle.

Uribe was arrested and transported to the city detention center.

Detectives with the Property Crime Unit need your help in identifying the individual responsible for the burglary of a building at the Vein Center located at 1756 Santa Fe.

On January 31 shortly after 4:00 am surveillance video captured the suspect casing the center shortly before the alarm went off. The individual gained access through a smashed window on the north side of the building. The individual made off with several office items from within the business.

The suspect is described as male in his forties 5′ 8″ to 5′ 10″ in height 170 -180 lbs., at the time of the burglary he was wearing a bandanna on his head, a t-shirt and jeans. He also appears to have several tattoos on his right arm.

If you can identify this individual we encourage you to call Crime Stoppers at 888-TIPS, or log on at www.888tips.com the information you provide could earn you a cash reward.

Traffic investigators received a call for a major traffic accident involving a pedestrian in the 700 block of Park Avenue shortly before 10:00 am. When they arrived they located a 59-year-old male victim lying on the roadway with critical injuries from having been struck by a vehicle. He was transported to Spohn Memorial Hospital in critical condition.

Witnesses tell investigators that a red truck was traveling east on the 700 block of Park Avenue when the victim ran out into the street not in a cross walk and was struck by the truck.

Officers located and impounded a red truck on Laredo Street.  Further investigation revealed it was not involved in the accident.

The Traffic Division will continue their investigation in an attempt to locate both the driver and suspect vehicle.  Witnesses describe the suspect vehicle as a red 1980″s GMC or Chevrolet pick-up truck with minor front end damage.  At this time there is no description available on the driver.

Anyone having any information regarding this crime is encouraged to call Crime Stoppers at 888-TIPS or the Corpus Christi Police Department Hit & Run Division at 361-886-2596.

The Corpus Christi Police Department honored several members from its rank and file today with a retirement ceremony.

The citizen of Corpus Christi lost a total of 392 years of community service experience today when 16 employes retired from the department. These individuals include both civilian and sworn personal from several different units within the department.

Each of the retires received a plaque honoring their time of service from Chief of Police Badaracco, along with a warm reception from current and retired personal from the department.

On behalf of the Corpus Christi Police Department, we want to congratulate each and every one of you on your retirement. We are grateful for your hard work and dedication, for each one of you have left an everlasting mark that makes this police department what it is today.

Detectives with Property Crimes Unit are asking for the public’s assistance in identifying the individual responsible for a theft of a money bag from a local cab driver.

In the early morning hours of  Tuesday January 17th the cab driver picked up a passenger at a local motel on Leopard St. Upon doing so the passenger saw and grabbed a money bag from within the cab and jumped out of vehicle in the area of Ayers and Ocean Dr. and fled on foot.

If you can identify this individual we encourage you to call Crime Stoppers at 888-TIPS, or log on at www.888tips.com the information you provide could earn you a cash reward.

Investigators with the Property Crimes Unit are asking for your help in identifying the individual responsible for the Theft at a local pharmacy store.

The subject was seen by store personal concealing 4 curling irons down the front of his trousers and then walking out of the store without paying for the items.

The individual is described as male in his late teens to early twenties, he stood 5’2″ – 5’4″ in height 150 -170 lbs., at the time of the theft he was wearing a black jacket over a dark-colored shirt, black jeans and black tennis shoes.

If you can identify this individual we encourage you to call Crime Stoppers at 888-TIPS, or log on at www.888tips.com,  the information you provide could earn you a cash reward. 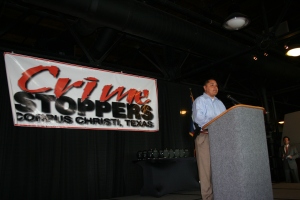 First, it’s serves as a way to say “Thank You” to the judges who support our program.  They do so  by administering a fine to every individual that is placed on probation in their courts. This particular fine is used by the Crime Stoppers program for the solo purpose of paying rewards to the tipsters who call the Crime Stoppers Hotline. So in a sense what happens is that the very individual who has been convicted of a crime in our county is now paying to put another criminal behind bars.

Secondly, we recognized the most productive Campus Crime Stoppers program for the previous school year. Those schools who excelled for the 2010-2011 school year are Moody High School and South Park Middle School.  Both of these campuses have had a long-standing succesful Crime Stoppers program which continue to promote and encourage participation in reporting illegal activity on their campus.

The luncheon is a fundraiser for the program, as mentioned above, the dollars received from the judges is strictly ear-marked for rewards and can not be used for the day-to-day operations of the Crime Stoppers office.

The Corpus Christi Police Department has arrested two juveniles in connection with the Jan. 13th Homicide on South Tancahua.

County Court at Law #5, Judge Chesney has issued a gag order on the case and no further information will be released by the Corpus Christi Police Department.

To review the original information released about the Homicide, click here: http://wp.me/p1D8kP-Rz